songs you don't like yet but you will soon. 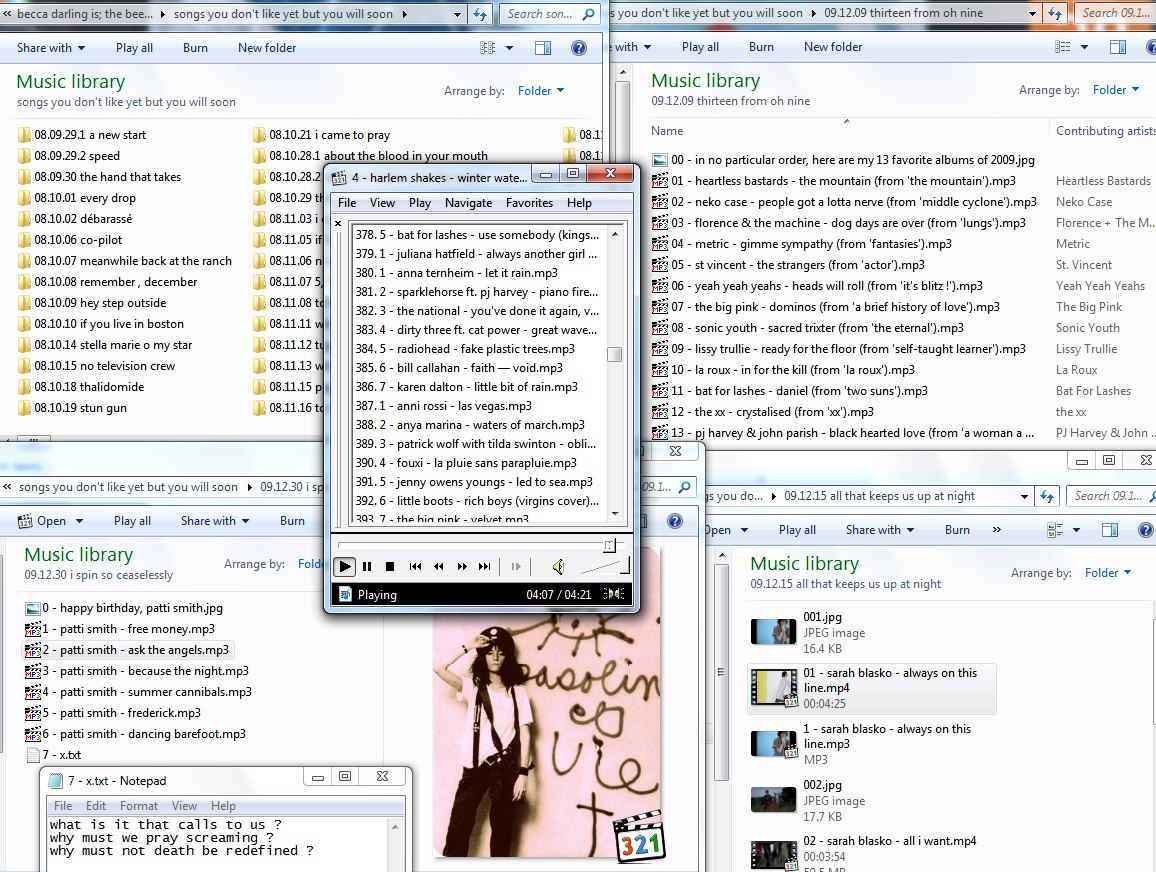 It is very large (5.5GB) but has been split into 23 parts for ease of downloading – and I'll explain more about it in a minute.... but first, some background:

I discovered becca's bee charmer blog in November '08 while researching Natalie Rose Lebrecht. Becca had posted Lebrecht's “No One Came” there the month before. Within minutes, I'd realized I had found my new favorite blog. Soon after, becca was searching for a place to host songs. As it happened, I had a website with a lot of unused space and was delighted to have her put it to such wonderful use. I am deeply honored to have been able to help in this small way.

Unfortunately, hard drive crashes and server changes resulted in the loss of hundreds of her songs over the years. We discussed restoring them all, but didn't end up finishing the endeavor...

Living on complete opposite coasts (I'm near Seattle), becca and I never had the chance to meet in person. And yet from the moment I discovered her blog, I began feeling a strong kinship with her. Music has such an incredible ability to connect people, transcending so many things that often divide us; and in this way, I consider becca to be one of my closest friends.

In honor of her memory, I have tracked down all of the songs* and videos becca posted which were lost over time. There are over 900, and they've been numbered and separated into folders matching her blog entries. The all-important text and images** are included as well; and I tried to stay true to her signature format (filenaming limitations forced me to make some changes, however, such as changing colons to semicolons, etc). There are also some extra songs which she uploaded but didn't post on the blog, as well as the archived HTML of the actual site.

Some of you will need a file splitter / joiner program to join the pieces together before you can extract the archive, so there are also two folders with Mac and Windows splitters. Please let me know if you have any problems with the files. Also, if you have a very slow connection, I would be happy to send you the full archive on an SD card.

My apologies in advance for any typos or other mistakes; I listened through them all once to check the quality, but sometimes she posted specific versions of songs, and I may have gotten a few wrong.

*The one song I could not find was the demo version of The Raveonettes' “With My Eyes Closed”. In its place is the album version. **The image for her April, 3, '09 post is missing.

I also manually crawled her blog with the Internet Archive's Wayback Machine a couple of months ago, which will hopefully lead to the preservation of it there (some of the entries are already archived, but most aren't).

Over the next few weeks, I'll be restoring the songs which are linked from her blog but missing on my site. I've started with her birthday post: http://thebeecharmer.wordpress.com/2009/02/19/freeze-frame-screen-kiss/ – – I'll keep her songs hosted on my site for as long as possible.

I have also commissioned a small song to be made by one of our mutual favorites in her honor, which I hope to share with you all once it is finished.

I know that becca will continue to inspire people for years to come, and am thrilled with the recently launched Memorial Fund.

Thank you for reading :^)